Since flirting with highs above $4.50 in late April STEEM has stairstepped down, eventually finding itself down below two bucks. What the hell is going on, you ask?

So did I. I found the best understanding came from fellow steemian @johnkingwriter who follows SBD more than I do. He thinks that SBD is being actively manipulated down to a level that matches prior expectations. No one really thought SBD would outperform STEEM last year, but it did.

It wasn’t supposed to do that, perhaps.

Luckily, the Lines of Force method doesn’t give a care in the world to Why price moves. LOF just sees the movements and accepts that this is reality.

Over the course of this year, LOF has indicated multiple price points with 100% accuracy and precision. There are still two EXITs in our model. Click for a larger image. 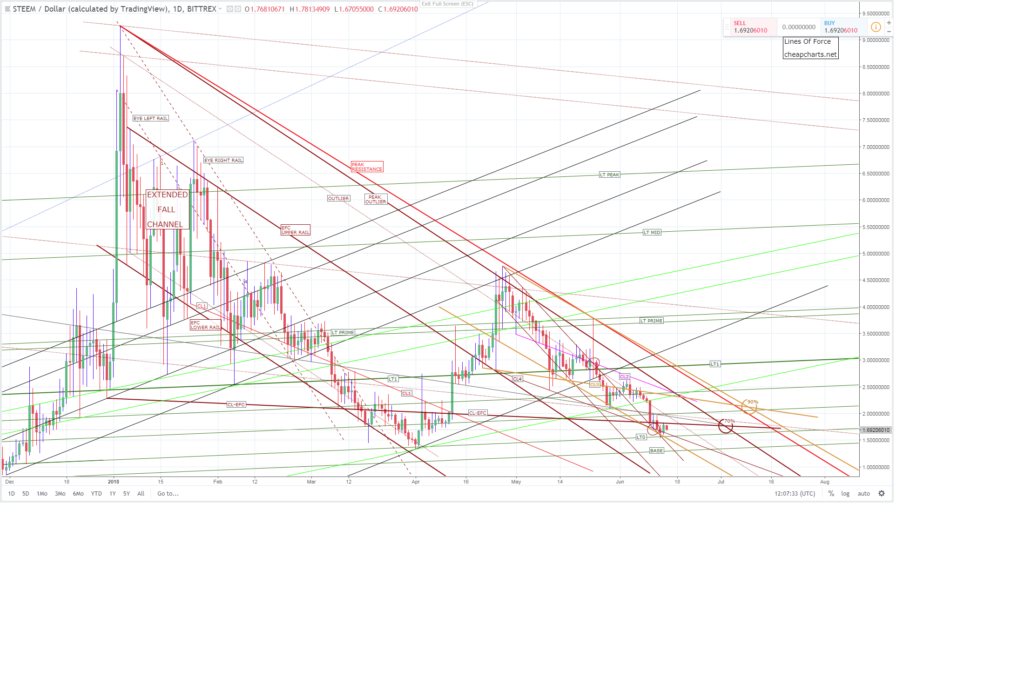 It appears that we should expect to finally cross the outside edge of the Extended Fall Channel on July 2nd at a price near $1.74 as shown by Control Line CL-EFC. The EFC control line is experimental and in fact, this is the first time I’ve ever tried to plot it. When I plotted it in February, I gave it a 30% chance of being correct. I now think those odds are around 70%.

The current local Fall Channel EXIT is shown about a week later, on July 9th. Price level at that point is indicated at $2.10 and I give this EXIT a 90% chance of being correct.

We have tapped the LT0 line twice during this EFC, both times dropping slightly below it. Usually if price breaks a line, even if it closes that day above the line, it means that price will drop and close below that line in the future. Not every time, but most.

If price does break and close below the LT0 line, it should find very solid support at the BASE line. Any break below the BASE line indicates a very uncertain future for STEEM.

More about Lines Of Force