The Steemiverse: the final frontier. These are the voyages of the Reader Ship Flying Wardrobe. Its mission: to seek quality content in the Stream of Steem. To curate unknown writers. To boldly upvote posts no man has upvoted before! 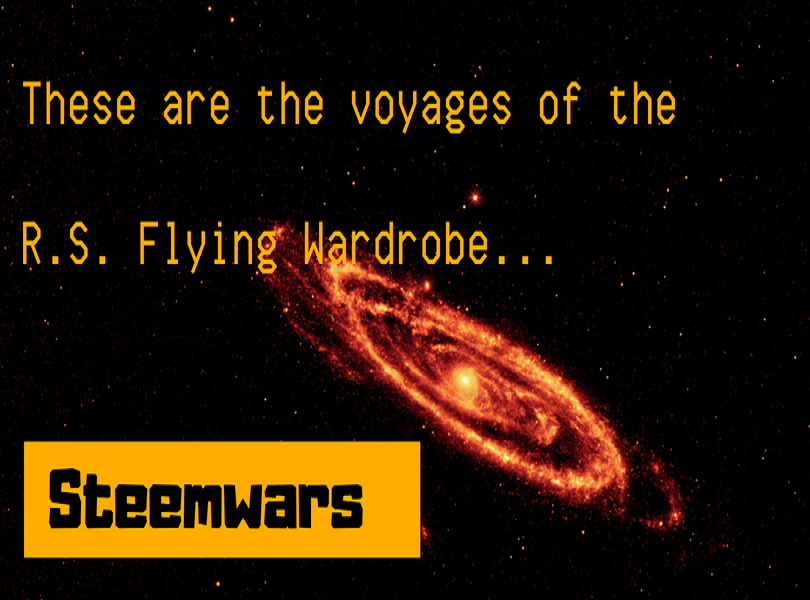 We flew for hours at ludicrous speed. I’ve never been a great fan of plaid, and by the time we arrived in the  Zzzzzzqqww quadrant I was truly sick of it. And that eagle’s head form I’d had to take. Give me fangs and whiskers any day.

The closing down sale was almost sold out. Most of the action was over. A few planets were still lit up with searchlights and blinking neon, and a couple of moons had little glows from the flea market types. But the good stuff was probably already gone.

“Too much time has passed. “ Seven moved his head around the room. It looked pretty weird, him walking around holding his head out in front of each of us. He must have been wireless.

“We’re too late.” Zombie trundled over to the viewport. “And I was hoping to find some exotic dirt.” His worms sagged into a mess on his head.

The witch typed into her console. “Put your head back on and give me a minute. I’ve tapped into the Zzzzzzqqww Sale Database.”

Jay tapped his upper pocket. “I could use some new pens.”

“Some place to sit around here would be nice.” I looked around at the utter lack of chairs. “Sitting and sleeping on the bare metal floor kinda sucks.”

They all looked at me. The viewscreen went black and Bex chimed in using harsh bold text. *Cushy spaces always lead to sex! I’ll have no cushy places within me!*

The words faded and the screen turned a sweet shade of mint green and text full of curly-ques. *But I would love a mobile body. An avatar of the ship so I can take care of myself.*

We all sat there a few moments saying nothing, looking at no one. Then Seven spoke.

“All the avatars are almost certainly gone by now. Would you settle for a small compact design that could be mounted on me somewhere? You could go wherever I go.”

It was Seven’s turn to get scolded. The screen turned dark and Bex spelled it out for him in flashing red on white, filling the viewscreen. *I will have an avatar. I will not ride piggyback on anyone. This crew will find me a body or this crew will be walking home.*

The console blurbled at the witch. “There is still an appliance sale at Grid thirty-six, three, forty-seven.” She tapped the console. “Setting course and engaging engines.

“There’s also a bookstore nearby, a pawn shop, some second-hand stores and a curio museum.” She looked around. “So we should be able to find enough stuff to fill Bex up.”

“Is there anywhere to eat?” I’d resumed my cat-man shape while they were talking and no one was watching. “I’m starting to get a bit hungry.”

She looked down and tapped the console a couple of times. “There’s a vegetarian place, but it looks like all the others have packed up and gone.”

We pulled up next to the planet with the most searchlights. There were a few other ships in the parking orbit, but for the most part the whole place looked like it might close at any moment. We wasted no time beaming to the surface.

Seven headed off to the pawn shop. Tiny and Liam walked up the hill toward the bookstore and the appliance sale, which were side-by-side, hoping to find an avatar for Bex. Zombie and Jay stumbled across the street into the museum. I stared at them, wondering why they had the same gait.

Shaking my head, I looked around the town for something to eat. There was always some kind of rodent population. I ducked into an alley and changed completely into a large feline form. I could cover ground so much faster this way. I set out looking for a quarry.

It only took minutes to find something suitable. It was on the outskirts of the sale. An older guy was just closing up. The sign lying on the ground said “Mountain Mama–Homegrown Goodness.” I crouched in the shadows and watched.

He had no clue. He just kept taking apart his booth. Stacking jars labeled ‘Shine On You Crazy Daemon’. Chewing on a piece of straw and making banjo noises with his mouth. It had been a few years since I’d had Hillbilly. They always go better with a little sauce, but this was no time to be finicky. I was famished.

Making no sound at all, I crept toward him inch by silent inch. I was only one tail-length away when he saw me, but it was too late. I leapt without a sound and buried my fangs deep in his throat, severing his vocal cords with my first bite, silencing that damned banjo.

It was then I saw the dog. An old hound, maybe fifteen years old. He was slow but he was coming for me–excuse the pun–doggedly. With his master’s throat in my mouth I retook my mancat form and let him watch. The old boy whimpered and ran under one of tables.

The fastest way for a Vegan to eat is to assume the form of a Nibblonian, so that is what I did. One chomp and a gulp, and my meal was delicious and done. Satisfied, I looked under the table.

“It’s best if you come with me.” I let my face mimic his dog-face and tapped his nose with mine. “Let’s go.” Together we walked back to the corner where we’d all beamed in.

Jay was sitting inside a tall, skinny brown box with a wooden door. “I found a Turdis!” I quickly surveyed the unusual find–a rustic wooden structure with a cut out of a crescent moon in the door. The wood was weatherbeaten planking and the roof was covered in moss and didn’t look like it could keep much rain out. I had no clue how he moved the thing around, as rickety as it looked.

“That’s nothing. I found this.” Zombie pulled a huge jar from a cardboard box and held it high with both hands. His worms danced a little ditty in unison from the top of his head. “Allow me to introduce the head of Leonard Nimstoy!”

I stared at the jar. What was inside might have been a preserved head, but if it was, it wasn’t preserved very well. The guy’s beard was only marginally attached and floated up around the eyes.

“He’s the guy on that show from the twentieth back on Terrearth that was on that show in the twenty-first about a robot who dated spaceships. Well, he wasn’t but his head was!” He held the head up high.

Jay looked at me and shrugged his shoulders. “I told him that was Ni-Moy, not Nim-Stoy. But he doesn’t listen. It’s like the worms ate his brain or something.” He looked past me. “Here comes the witch and the droid.”

I turned as they arrived. “You guys find a body for Bex?”

“The body she requires is being procured. It will be delivered to the ship within the hour.” Seven set a box on the ground. “And we found these.”

We looked inside as Seven recited the contents. “A dog-eared paperback version of Nettiquette for Idiettes, by Sir Cork of Steemiverse A Prime. A leather-bound copy of the Original Works of Gina Frasier. A box labeled ‘Upvote’, with a picture of the intergalactic star Grungy Cat. A Rebuq’s Time Cube (ever try to solve one?). And thirty thousand individually-wrapped freeze-dried Moon Pies.”

“Moon pies?” I had no idea. They looked like little round dots to me.

“Apparently they are food and expand when wet. Luckily, I will get to watch as the rest of you try to digest them.”

I couldn’t tell if the bot was joking or not. I stood up and nodded to Tiny. “How about you?”

She laughed. “What do we want more than anything else on that ship?”

“Brains!” We all looked at Zombie.

“I have arranged to furnish the entire ship. Sofas, chairs, tables, cabinets–the works! It’s all being delivered along with Bex’s android body.”

“She’s not going to like that.” Zombie’s worms nodded their agreement.

“There’s nothing she can do about it. We have to fill the ship and there was nothing left to fill it with. She can take it up with that Time Lord.”

The rest of us gathered around her and she beamed us to the ship.